It is with deep sorrow that FISU has learned of the passing of Roberto Outeiriño Hernanz, former treasurer and Emeritus honorary member of FISU, as he lost his fight against COVID-19.

FISU was informed of his passing by his son Roberto Outeiriño Uceda, who was Sport & Operations Director at the Napoli 2019 Summer Universiade.

“FISU was a part of my father’s family and I hope that his love and dedication to the university sports world will always be remembered,” Roberto Outeiriño Uceda wrote to the FISU leadership.

“It is indeed a very big loss for the whole FISU Family,” said FISU President Oleg Matytsin. “I had known him for many years and am personally grieving at this terrible news.”

Roberto Outeiriño Hernanz had been awarded the ‘Real Orden del Merito Deportivo’ by the Spanish Government, for his lifelong devotion and service to sports, university sports and athletics.

He had also served as IAAF Corporate Services Director for many years. The ‘Real Orden del Merito Deportivo’ is the the highest sports award in Spain, conferred by His Majesty King Juan Carlos.

“Roberto was a tall figure in university sports and the sports world in general,” said FISU Secretary General-CEO Eric Saintrond, expressing his sorrow. “He was FISU treasurer for a long time, as well as the FISU CTI Chair and also an Emeritus Honorary Member. Our deepest condolences to his family.”

FISU First Vice President Leonz Eder said he felt a deep, personal loss at hearing the news. “I was very familiar with Roberto and his family,” said Eder. “He was a great mentor to me. In fact, he was like a father figure to many people whose careers he mentored and shaped. Along with some old pioneers, he was among the generation that built FISU in many ways.”

The entire FISU family is together in this grief and hopes that Roberto Outeiriño Hernanz’s family finds strength at this difficult time. 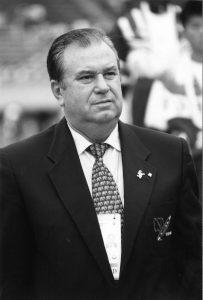